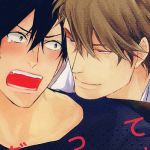 It’s said that the hero is to defeat the demon king in both body and soul before the demon king tries to take over the world, but now a days who really believe in this stuff. Certainly not Mao who just so happens to be the reborn demon king. However, even though he has strange powers which makes other bad-guy type people fall for him, he has no intention of taking over the world. One day the hero, Kamiko reaches Mao’s office and notices right away that he is the demon king but in order to test this theory – he kisses him! Mao just wants to get this defeat over with and go back to his daily life but when Kamiko seizes his company and says it’s not going to be that easy.

Mao’s life is turned upside down and now they live together and Kamiko keeps insisting that the only way to be defeated properly is to have s@x!